The atmosphere contains about 79% nitrogen gas (N2) and is thus a major reservoir for this important nutrient. Nitrogen is a critical component of proteins, many vitamins and the nucleic acids DNA and RNA. Plants incorporate the nitrogen from ammonia and nitrate into amino acids, proteins and nucleic acids and vitamins. These nitrogen-containing molecules are eventually consumed and are passed through the food web.

When an aquarium is first set up, the water is clean and there are no bacteria to start the nitrogen cycle. When fish and other aquatic animals are introduced to the water, the unfinished foods and their waste will decay and produce ammonia (NH3) that is highly toxic to most fishes or ammonium (NH4) which is non-toxic. These nitrogenous compounds are converted to less toxic compounds via the nitrogen cycle. When the ammonia in your aquarium is of a certain concentration, nitrosomonas bacteria will form colonies in your filter to oxidise NH3 and NH4 to nitrites (NO2) which is toxic. Nitrobacter bacteria will then oxidise the nitrites to non-toxic nitrates (NO3). Denitrification will then reduce nitrates (NO3) nitrogen (N2) or nitrous oxide (N2O) gas that will then diffused back into the atmosphere to close the nitrogen cycle. Therefore, cycling the tank refers to the process of establishing bacterial colonies in the filter bed that convert ammonia to nitrite to nitrate.

During the cycling process, ammonia levels are very high until the nitrosomonas bacteria are established to convert the ammonia into nitrites. When nitrosomonas are first established, the nitrite levels will increase until nitrobacters are established to convert the nitrites into nitrates. Thus, the water is highly toxic before the formation of nitrobacters as the ammonia and nitrite levels are very high and it is advisable to introduce fishes such as guppies or feeder goldfishes to start the nitrogen cycle in your tank before placing the arowana into the tank. Once the nitrogen cycle is set up in your tank, it is a continuous process. 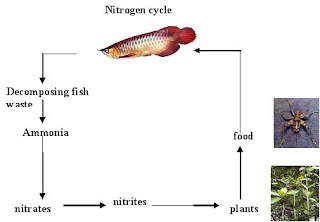 General hardness (gH) refers to the concentration of magnesium and calcium ions in water. Some species of fishes require soft water whereas others prefer hard water. Although most fishes can adapt to waters of different gH, their ability to breed may be affected. gH is generally measured either in degrees hardness or in ppm (parts per million)

Carbonate hardness (kH) refers to carbonate hardness is directly related to the concentration of bicarbonates or carbonate ions in the water. It measures the buffering ability of the water to absorb and neutralize the addition of acid while keeping pH stable. Water with high kH has sufficient buffering to keep the pH constant since nitrogen cycle in the tank produces nitrate that forms nitric acid. Without buffering, pH will fluctuate. However, if the water has high pH and kH, it will be more difficult to lower the pH since the water is now more resistant to changes in pH. Lowering the kH of water can be done by using reverse osmosis water or by injecting carbon dioxide in the water. Increasing kH will often require the addition of sodium bicarbonate. Soft water results in low pH since there are less bonding of bicarbonate ions and hydrogen ions and hard water results in high pH.

pH is also known as the power of hydrogen and it measures the concentration of hydrogen ions in the water. Although water is generally considered to be a stable compound, individual water molecule can gain or lose hydrogen atoms:

In pure water, there is an equal concentration of hydrogen ions (H+) and hydroxide ions (OH-) and has a pH of 7. Dissolved chemicals and minerals change the balance of those ions from a perfectly neutral state. Increase the amount of hydrogen ions and the water becomes more acid and hence a lower pH. Increase the amount of hydroxide ions will make the water becomes more alkaline with a higher pH e.g. a sudden increase in the pH often indicates high ammonia content in the water.

The kH of the water must also be considered because ph in harder water are more difficult to adjust. Some ways to reduce pH includes putting in driftwood into the aquarium or injecting carbon dioxide whereas putting limestones based rocks will increase the pH. However, it must be noted that pH should be gradually changed because sudden changes in pH can cause extreme stress to the fish and it might die.

Understanding the chemistry of the water in the aquarium is important in maintaining the well being of your fish. While nitrogen cycle, gH, kH and pH are quite distinct, they are actually interact to influence the water conditions. Decorations and the setups such as driftwood, driftwood, limestone will also affect the water parameters.