Despite being caught in a bad traffic jam on my way to Panda Aquatic Centre, it was all but a fine day for a visit to the countryside. The skies were clear and the air was fresh after a brief spell of rain the wee morning hours. Today, I would be witnessing the harvesting of the red arowanas from Panda Aquatic Centre. 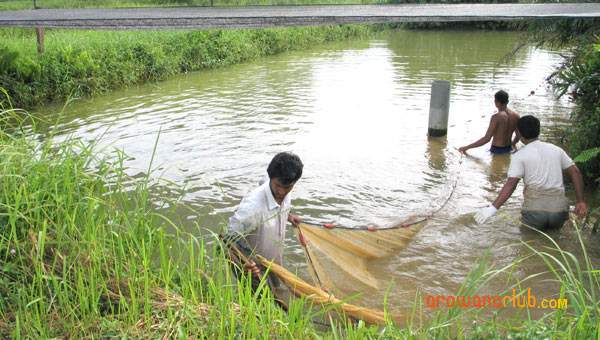 Workers getting ready for the harvest.

I met up with Mr. Kan from Panda Aquatic Centre and was briefed by him on the schedule for the day. Both his red arowanas and his crossback arowanas will be harvested today. 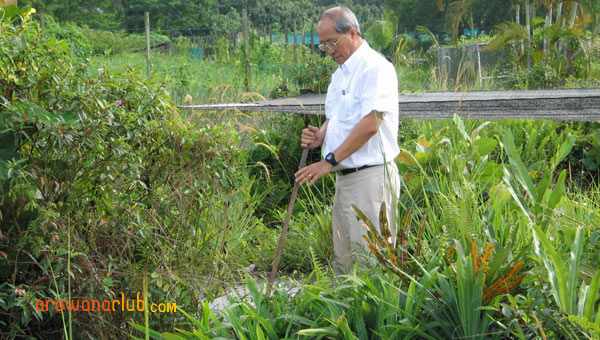 Mr.Kan, CEO of Panda doing his harvest ritual. Just kidding,
he is actually looking out for snakes for the safety of his workers.

As we walked towards the breeding ponds, his workers were already in the thick of the action. They were walking cautiously in the waist deep waters, planting the necessary nettings and bamboo poles in place to round up the red arowanas. 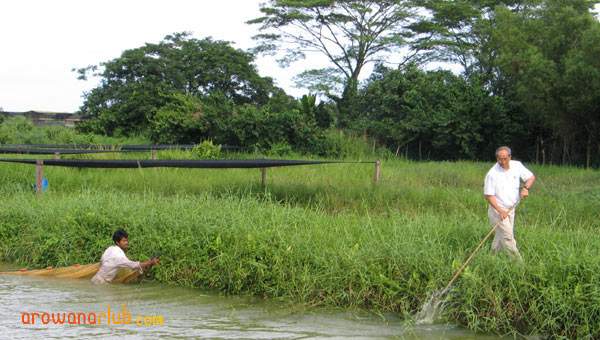 Workers wading slowly through the chest deep waters to guide the arowanas into the
specially designed net. Mr. Kan beating the edge of the banks to urge the arowanas along.

Although Mr Kan did not enter the breeding pond, he was also doing his part along the edge of breeding pond with a wooden pole, striking the grass to ward off any snakes that might hurt his workers. As the workers slowly pulled the net along the pond to round up the arowanas, Mr. Kan then used his wooden pole to beat gently around the edge of the pond to urge the arowanas into the net. 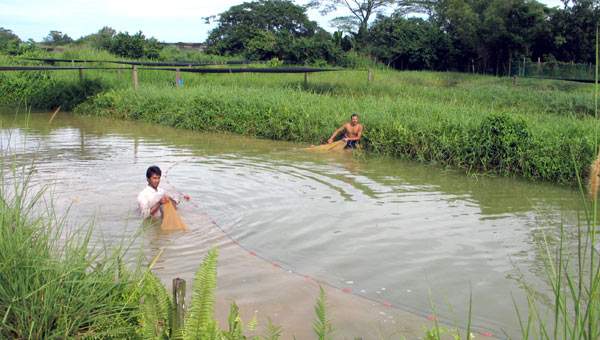 The workers carefully ensuring that none of the arowanas were able to escape.
Every arowana in the pond must be checked for eggs or fries.

While I have witnessed numerous harvesting of arowanas, each harvesting is quite unique. The harvesting procedures are quite similar but you never know what to expect in each harvesting. Beneath the murky waters of the breeding pond are actually numerous productive red arowanas, each capable of producing at least 20 fries! This is already quite a feat as red arowanas are often reported to have a lower productivity. The secret to having such a productive pool of breeding arowanas is probably known to the farmer but from what I have observed in Panda Aquatic Centre, Mr. Kan had probably done his research and set up his breeding ponds to simulate the natural environment of the red arowanas, ensuring that the right atmosphere and environment are present to boost his arowanas’ productivity! Not only were his arowanas productive, I was equally impressed with the physical appearance of his arowanas. Each red arowana displayed a beautiful coat of red scales. I would probably have to bring my water parameters test kits the next time I visit the breeding ponds to find out what is the secret to having such productive and beautiful red arowanas! 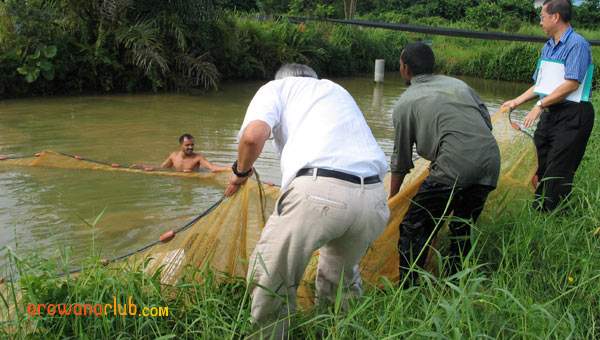 Hauling the net partially out of the pond.

When the red arowanas are hauled up from the water and inspected for fries, I could sense the great expectation and anticipation in everyone. There was tense concentration as the worker pried open the arowana’s powerful jaws to introduce the numerous fries to this new world! 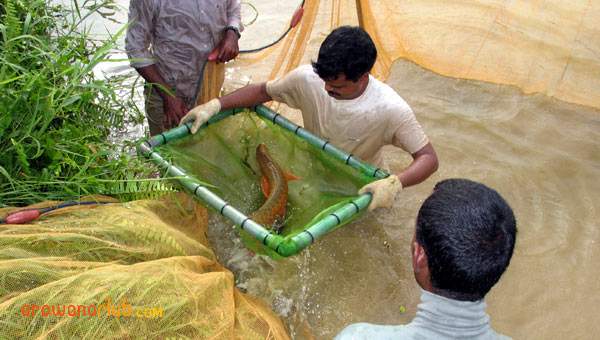 Special bamboo sticks were strategiclly placed to form a barricade to prevent the arrowanas from
leaping over the net. So far, this is only the easy part. Now, let's get to the business at hand! 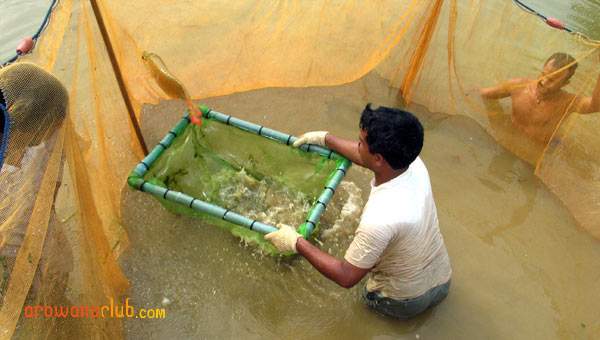 Catching and inspecting all the arowanas in the pond. Not an easy task if you have slippery and strong jumping customers.

The same procedures of laying the nets and cornering the arowanas were repeated in the next pond. This time, the golden crossback arowanas will be harvested. 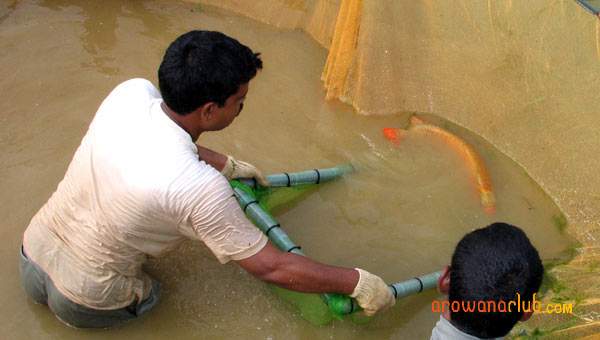 A male red arowana is slowly coaxed into the net.

The well-trained and experienced workers soon identified the male brooders. With a firm grip, the male brooder’s jaws were unlocked easily and this time, close to twenty crossback fries were released! It was quite a bountiful harvest, wasn’t it? 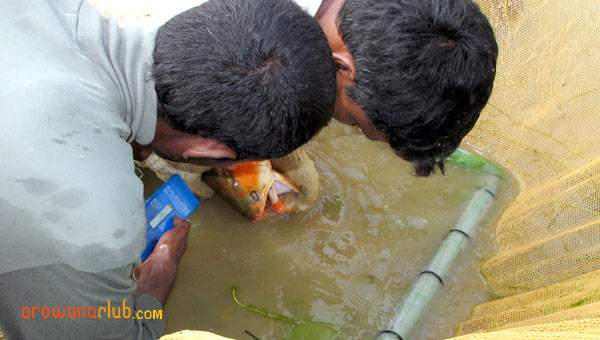 Gently prying open the mouth to remove the fries. An electronic scanner is also used to
scan the tag number of the parent fish. A really fine specimen of red arowana. 1st of the day. 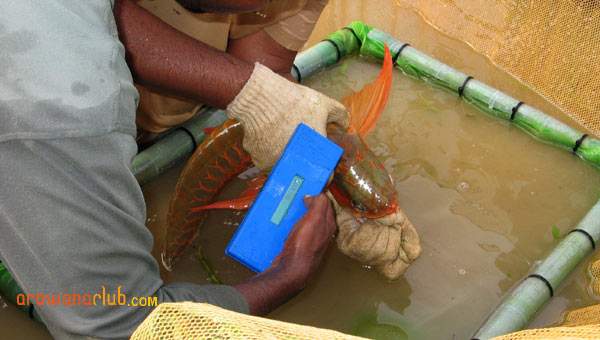 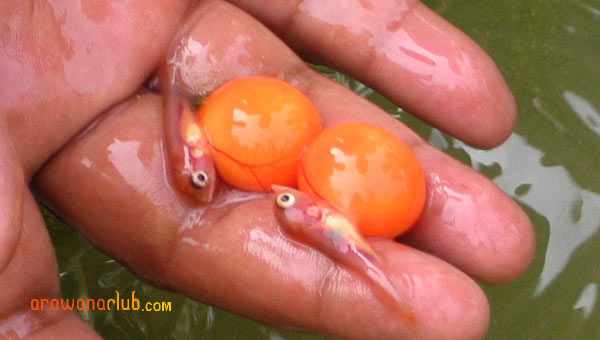 Over twenty fries measuring about 1 inch each came from the first Red Arowana. 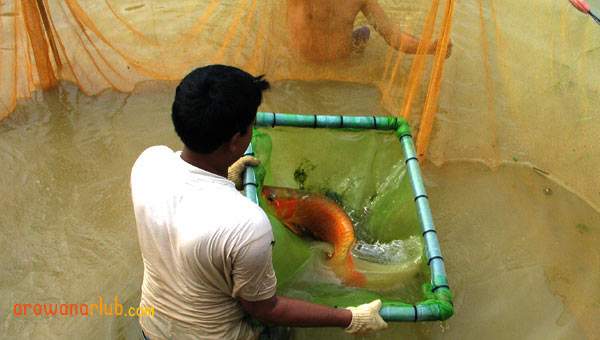 Another male brooder spotted! This piece is a real red shocker! 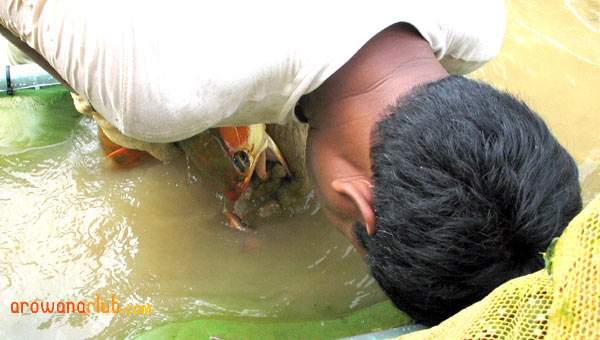 This time, there were over 40 fries taken from the brooder! 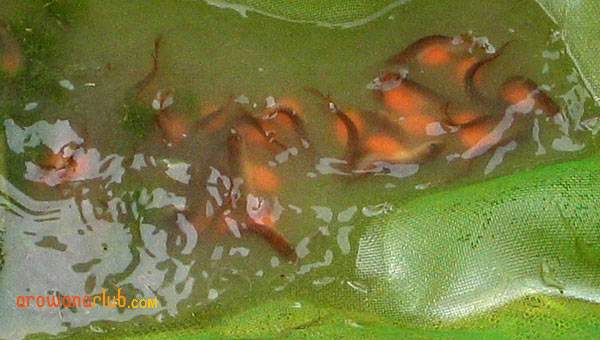 As well, some were already swimming about freely. 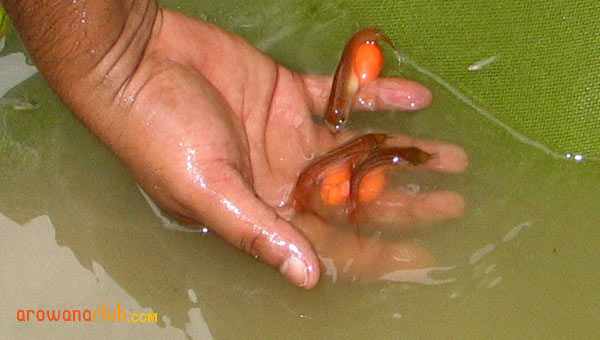 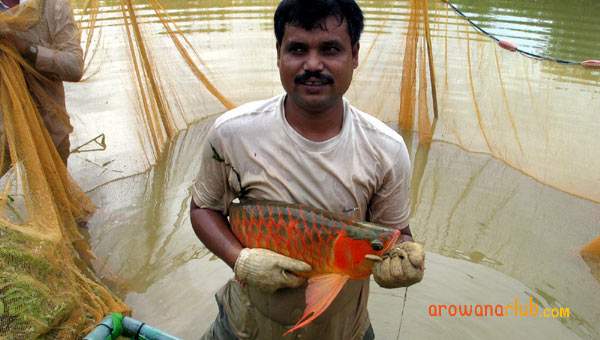 A real catch of the day. Quality all over. 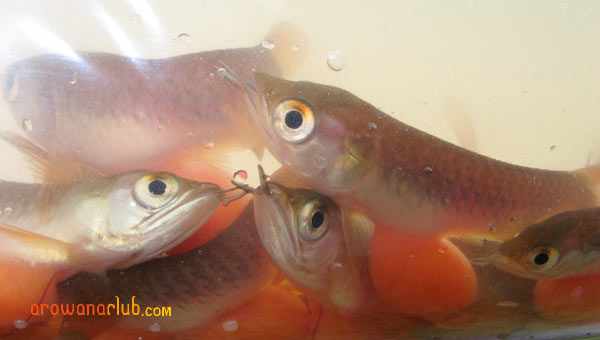 Photos by West
Article by NSK
Originally published in www.arowanaclub.com